This caterpillar has been parasitized by a wasp and I posted this photo to Instagram some time back where it was very popular. Here’s what I originally wrote about the caterpillar when I posted it to Instagram (slightly edited for reasons of space): 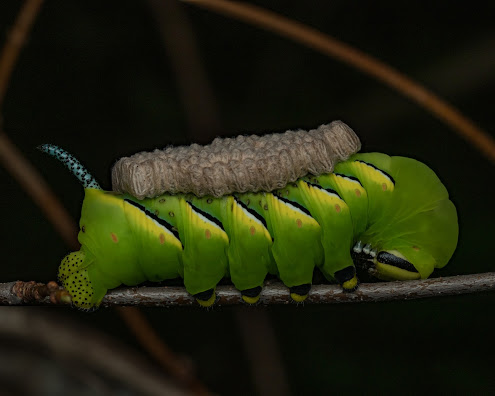 Sphinx kalmiae caterpillar. Also known as Laurel Sphinx or Fawn Sphinx Moth. ⁠⁠Here is a beautiful caterpillar that's been parasitized by a wasp. I found it a few weeks ago here in Virginia. ⁠⠀
⁠I see parasitized caterpillars frequently, but this mat of little cocoons was unlike any I'd seen. Turns out that it’s likely a wasp in the genus Microplitis. ⁠⠀
⁠The wasp laid her eggs under the skin of the caterpillar. These matured, hatched and the larva fed on the caterpillar. They then emerged (stretch and you can see little exit marks) and spun cocoons for themselves. They will eventually emerge from the cocoons as adult wasps. ⁠⠀
⁠The caterpillar is still alive but will not survive.⁠⠀
⁠In nature, all things are connected. The wasps evolved to take advantage of a niche where they could thrive -- provided they don't become so successful that they wipe out their host species. ⁠⠀

Why is a photo of this parasitic event more interesting to people than a picture of a weevil going about his business? Or a bee sitting on a flower?
I'm sure psychologists have studied this, and I'll bet that somewhere at the root of the human fascination with doom, disaster, misery, and mayhem is the knowledge that if the bad shit is happening to someone else (and not you), that's generally a good thing.
In other words, we look at that caterpillar and know that we will not be eaten alive from the inside by those particular wasp maggots. We can then say, "Oh, that's horrible -- the poor thing -- so glad my life is better than his!"
Newspapers know this (if it bleeds, it leads) and plan their page layouts accordingly.
Meanwhile, we've somehow also managed to come to terms with the fact that we are destroying our host (Planet Earth) and are making no significant steps to change our behavior. Instead, we are leaving it to future generations to cope with rising oceans, crop failures, and the extinction of large numbers of species -- you know the list.
What a simultaneously curious and incurious species we are.

Jeremy Squire
I'm a macro photographer who is focussed on insects, amphibians, and small reptiles. I often photograph in the threatened forests of the world and support the continued protection of national parks and reserves that are home to so many rare and threatened species. You can see a small sample of my work on my website along with information on some of the forests I've visited (link is below.)